The ELF project was officially launched during a successful three-day meeting which took place from 6th October to 8th October 2015  in Prague, the Czech Republic. Representatives of all the partner schools came together to discuss project activities and assign their responsibilities. They established guidelines that will help all of us complete the project on time and within budget. The participants were also trained in the Web 2.0 tools that are going to be used during the project.

The Czech school organized an excellent kick-off meeting that got all the participants focused on the same objectives. Visiting Prague was unforgettable experience! All thanks to the great host team and the scenery of their hometown! Nestling alongside the mighty River Vltava, Prague  is a fairy-tale city of magical beauty all of us are still bewitched by! The meeting was also the opportunity to get to know each other, form friendships, and share inspiration! 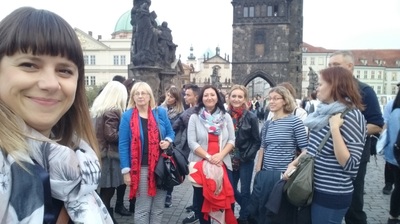 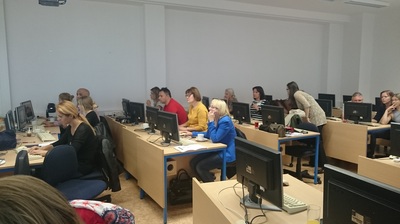 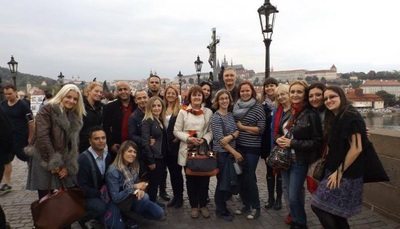 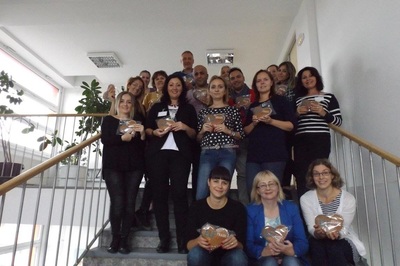 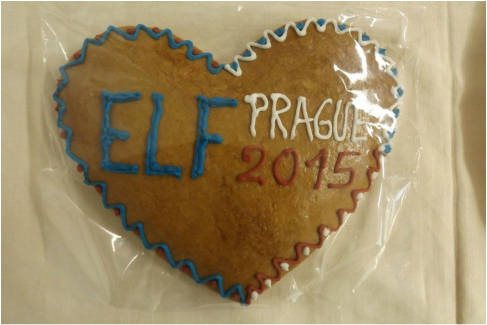 The first short term exchange of groups of pupils took place in 1st primary school Bjelovar in Croatia from the 18th till the 22nd of April. During that week pupils and teachers learned and saw many interesting things.

MONDAY
Pupils and teachers from Croatia prepared a wonderful welcome program.
After the program we walked around Bjelovar and went to the County Hall where we were greeted by Mrs. Ana Antolović the Head of the Department for Education, Culture, Sports and National Minorities in Bjelovar- Bilogora county.
In the afternoon we had a workshop where we created a model of an average participant of our ELF project. This is Pepik.

TUESDAY
In the morning the pupils had two workshops. In one of the workshops they made necklaces with pendants with their initial written in Glagolitic alphabet.
During the second workshop pupils learned how to use web tools- Emaze, Mixbook and Qzzr.
In  the afternoon pupils played a City game. They explored Bjelovar and had loads of fun.
Later all the pupils had a workshop in the town library.

WEDNESDAY
In the morning pupils and their teachers went to the Town Hall where they were greeted by the major of Bjelovar Mr. Antun Korušec.
After that all the pupils participated in the Project day organized in the 1st primary school. Each class presented Croatia in some way.
In the afternoon we went to the capital city- Zagreb where we had an organized tour and some free time.

THURSDAY
We spent a wonderful day in the beautiful national park Plitvice lakes. "A picture is worth a thousand words".

FRIDAY
In the morning pupils had three workshops. They wrote the articles regarding their stay in Croatia for the Elf world magazine. They made an ELF phrasebook of Friendship and Fun. They also did a survey regarding their stay in Croatia and signed their names on the Wall of Fame. Later we had a Kahoot! quiz about Croatia.
In the afternoon we had a farewell party. We had some pizza and a wonderful ELF cake.

This was a wonderful experience for us all. Thank you all for everything! 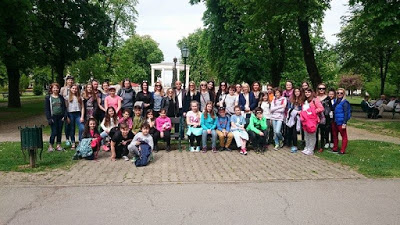 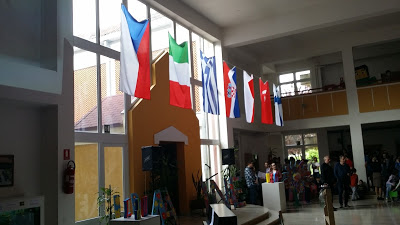 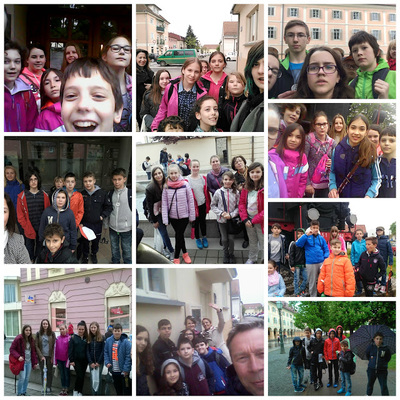 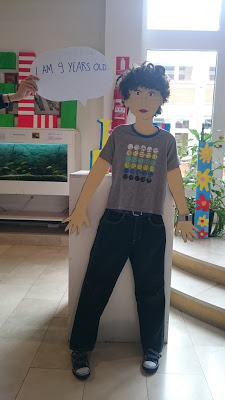 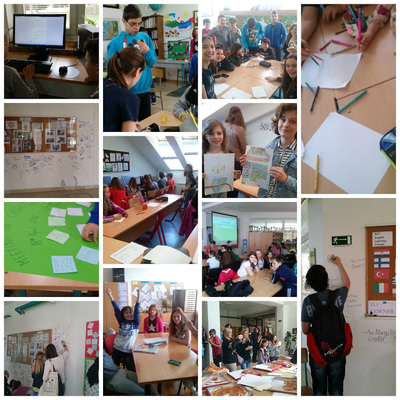 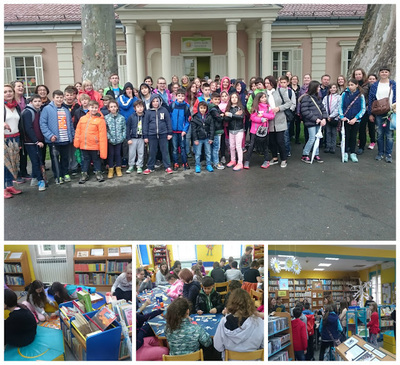 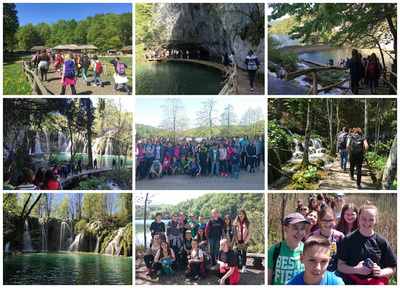 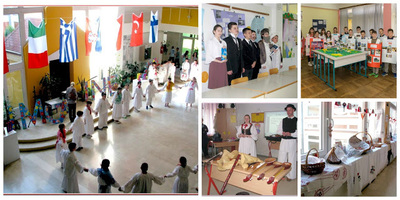 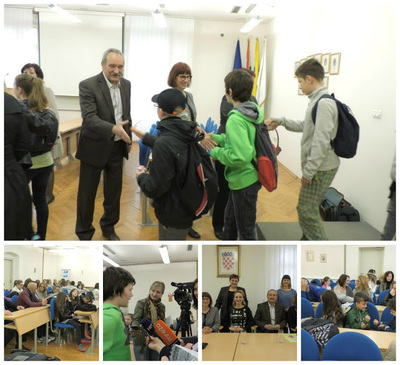 The 2nd transnational meeting of our ELF project was successfully held in Alexandroupolis (05-07/10/2016).The coordinators and teachers who took part observed lessons with the use of ICT, participated in workshops about the project and visited some interesting sights in the area of Alexandroupolis-Evros. The next meeting will be held in Finland in February 2017. 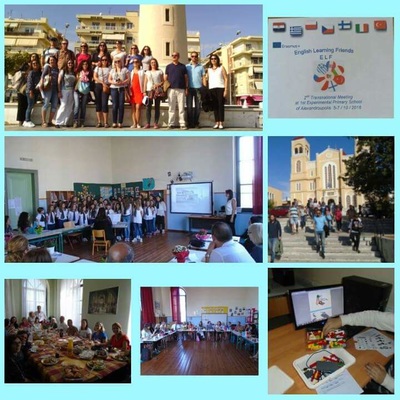 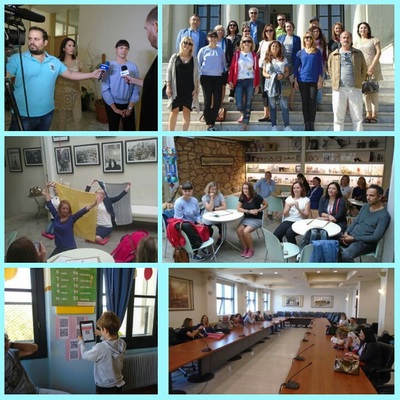 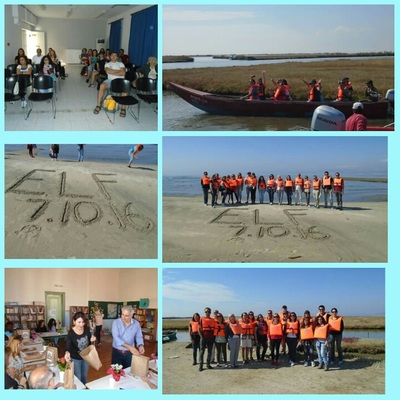 Sunday, February 12th 2017
All the teams arrived in Helsinki on Sunday. Everybody was happy but tired after a long trip. We stayed at Hotel Arthur is Helsinki and we had free-time in the evening. The teams went to have dinner and some of the Turkish teachers tried a Finnish speciality, reindeer meat with mashed potatoes and lingonberry.http://elflauritsala.blogspot.fi/2017/02/erasmus-vieraita.html
Monday, February 13th
After a nice breakfast at the hotel, we had some free time in the city. Some went sightseeing and shopping, while others decided to relax at the hotel. After lunch, we had a guided tour in Helsinki. We saw Helsinki Cathedral, visited Temppeliaukio Church and counted the pipes of the Sibelius Monument (there are more than 600). After the tour, we started our three-hour drive to Lappeenranta
and arrived there at 7 p.m. All the host families were at school to meet their guests and everybody was ready for a great week filled with new experiences.

Tuesday  February 14th 2017
In the morning we had a welcome party at school.http://elflauritsala.blogspot.fi/2017/02/tervetulojuhla-koulullamme.html Whole school took part in the celebration.
In the afternoon all the exchange students had music. They practised the ELF-hymn together.
All the teachers had a meeting. We talked about the project and all the task that we have to complete.
In the evening we had Valentine´s Day ice skating event.  A lot of exchange students tried ice skating for the first time. http://elflauritsala.blogspot.fi/2017/02/ystavanpaivaluistelua.html

Wednesday 15th February 2017
http://elflauritsala.blogspot.fi/2017/02/keskiviikon-puuhia-koululla.html
In the morning teachers and pupils took part in a class Finnish wood and paper industry. They also participated in Swedish lesson.
After lunch we had a workshop, Building up Elfville, for students and teachers.
In the afternoon students watched the Angry Birds movie. Teachers had a meeting with Head of General Education Division of Lappeenranta in the city hall. She told about Finnish school system. http://elflauritsala.blogspot.fi/2017/02/vierailu-kaupungintalolla.html

In the evening teachers went to the cabin and had a sauna-night there. There was also change to walk on the lake with snowshoes. Children spent their evening and night with the host families.

Thursday 16th February 2017
http://elflauritsala.blogspot.fi/2017/02/torstaina-jatkuivat-mukavat-jutut.html
Thursday started by building Elfville.
Then it was time to do postcards from Finland.
After school lunch, all guests and hosts played some games in the snowy yard.
The best part of the day was to visit the Angry Bids-park.

Friday 17th February 2017
http://elflauritsala.blogspot.fi/2017/02/perjantaina-saimme-monta-asiaa-valmiiksi.html
Friday was the last whole day together.
In the morning the students recorded ELF-anthem which tells about English Learning Friends.
Then it was time to record ELF-dance. It was planned by ELF-club Finland.
The last task was to finish Elfville mock-up town.
After finishing the tasks we had cake, juice and coffee.
In the afternoon we got to know the Fortress of Lappeenranta and the harbour.
In the evening the teachers were having a farewell dinner in restaurant Kehruuhuone.
Saturday 18th February 2017
In the morning it was time for goodbyes!
http://elflauritsala.blogspot.fi/2017/02/have-safe-trip-home.html 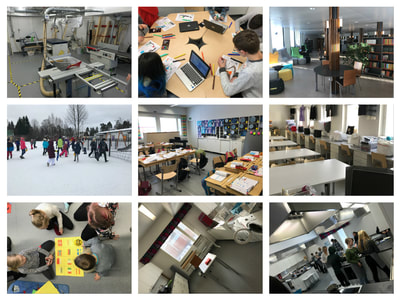 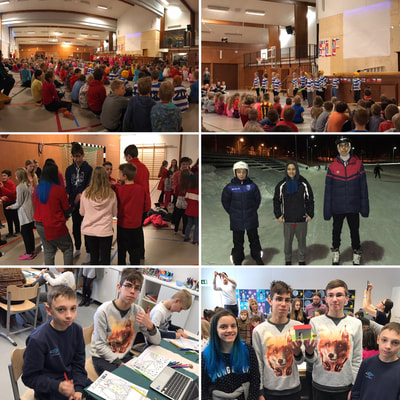 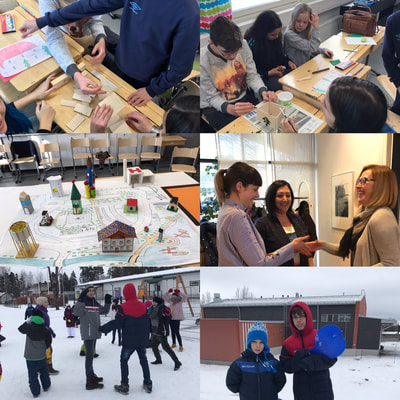 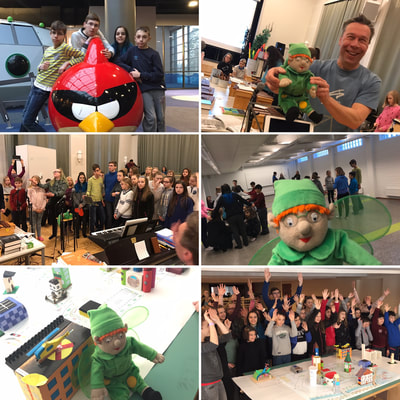 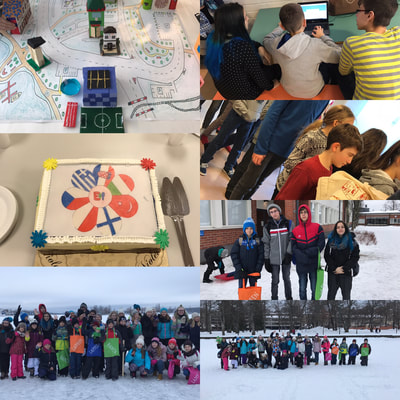 The 3rd transnational meeting and also the final meeting of our ELF project was successfully held in Bari (16-18/5/2017).The coordinators and teachers who took part observed lessons with the use of ICT, participated in workshops about the project and visited some interesting sights in the area of Bari.
This project has been funded with support from the European Commission.